Home / Exhibitions and Collections / On View / Art of the American West: The Haub Family Collection 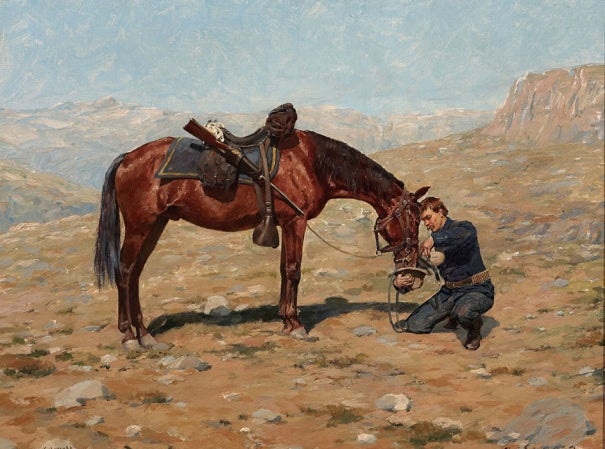 Art of the American West: The Haub Family Collection

Updated with new works from the collection! April, 2015.

From the shores of Puget Sound, to the tallest peaks of the Rocky Mountains, to the banks of the Missouri River, the artwork of the American West informs our perceptions of this varied region. This inaugural exhibition of the Haub Family Collection at Tacoma Art Museum spans more than 200 years of work by historic and contemporary artists. The artworks examine ideas of American identity over time, delve into storytelling and mythmaking, and explore the vast American landscape. See how concepts of the Westâ€”both real and imaginedâ€”have continually changed and evolved and still influence us today.

The sculptures in the Haub Family Collection introduce a cast of iconic characters found in much of the art of the American West. Here you will see Native American leaders, cowboys and Pony Express riders, artists at work, and a host of wild creatures. Though all classically western subjects, these figures were created by artists from the East Coast to the West Coast, some inspired by Italian craftsmen, others by ancient Assyrian art or 19th-century Parisian trends. As a whole, they reveal that the idea of the American West extends far beyond its geographic borders.

How does a new country create a distinct identity? In the early 1800s, artists turned to the people and landscapes of the West to distinguish the United States from its European roots. Soon images of the Westâ€”both real and imaginedâ€”became popular subjects in American art. At the dawn of the 20th century, new industries and growing cities reshaped life in the West. Artists responded to these changes in various ways: some sought escape by plunging into historic recreations, celebrating the past in their artwork, and others saw the unique locations in the West as inspiration for a new, modern approach to American art. Today, contemporary artists respond to and question ingrained assumptions about the American West, prompting a new understanding of the “Old West” and making bold statements about the wide variety of contemporary cultures that comprise the modern West.

Powerful stories enchant, excite, teach, challenge, and inspire us. Since the early 19th century, storytelling and narrative have been prominent themes in the visual culture of the American West. Many artists in this exhibition worked as illustrators, bringing life to books, magazines, posters, and other forms of communication. With familiar characters and symbols, they perfected the art of storytelling through images. Influenced by European traditions of   history painting, photography, and early cinema, these artists helped create an imaginative American folklore around the idea of the West. This gallery examines the tension between history and myth in these artworks, and explores artists who both craft and deconstruct the stories of the American West.

Since the time of early exploration and settlement, artists have responded to the dramatic landscapes and changing environments of the American West. In the 19th and early 20th centuries, artists lamented senseless environmental destruction and created works that generated a call to action, helping prompt early ideas about conservation and influencing the formation of the national park system. The landscapes of the Westâ€”with rolling hills, jagged peaks, bright skies, and brilliant colorsâ€”have long served as artistic inspiration, prompting both realistic and abstract interpretations. These artists encourage us to see the land and wildlife in the West through their eyes, with wonder and admiration.

This exhibition is presented by The Boeing Company.

It is supported in part by an award from the National Endowment for the Arts and KeyBank.