Home / Exhibitions and Collections / On View / Jaune Quick-to-See Smith: In the Footsteps of My Ancestors 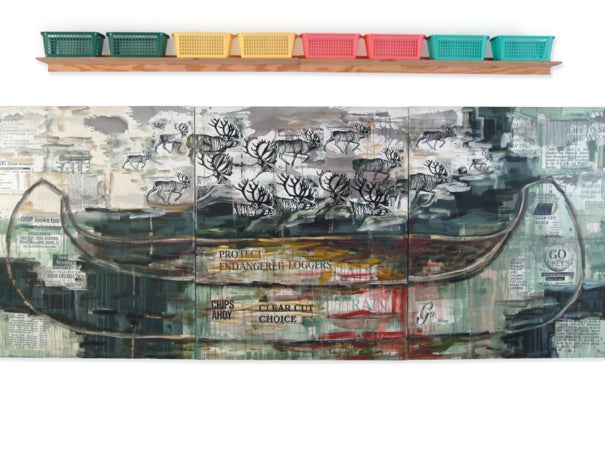 Jaune Quick-to-See Smith: In the Footsteps of My Ancestors

Jaune Quick-to-See Smith is one of the U.S.’s finest Indigenous talents. Smith is a legendary artist with extraordinary aesthetic, intellectual, and curatorial achievements to her credit.

She mines her cross-cultural experience and Salish-Kootenai identity, and spans cultures with powerful, idiosyncratic results of high aesthetic caliber. Smith has an international reputation with a strong, clear body of work; she has earned her leading standing among women artists and Native American artists while simultaneously aligning both of these often still marginalized groups more closely with the mainstream art world.

The exhibition will examine themes that perennially recur in her work, including conflict, compassion, peace, the cycle of life, irony, and identity. Smith has always operated on a cuspâ€”culturally, temporally, aesthetically, and from a gender perspectiveâ€”which gives her work an attention-getting vitality, originality, and relevance. Her role in the shift toward deepening respect for Native American contemporary art in its own right has been significant. She describes herself as a “cultural arts worker.” Smith also has credits as a curator, writer, speaker, and leader in the arts.

Jaune Quick-to-See Smith has over a hundred solo exhibitions in 28 states to her credit, from California to Florida and from the northern Plains states to Texas. She has also exhibited internationally and in dozens more group exhibitions worldwide. In addition to holdings at Tacoma Art Museum, her work is held in the permanent collections of such notable institutions as the Albuquerque Museum of Art, Baltimore Museum of Art, Detroit Institute of Art, DenverArt Museum, Indianapolis Art Museum, Metropolitan Museum of Art, the Museum of Modern Art, the National Museum of the American Indian, the Smithsonian American Art Museum, the Walker Art Center, and Yellowstone Art Museum.

The exhibition will be accompanied by a catalogue with contributions by notable essayists Lowery Stokes Sims and Gail Tremblay. The exhibition includes more than 40 paintings and works on paper from the artist’s collection, the Yellowstone Art Museum’s permanent collection, and other private collectors. Organized by the Yellowstone Art Museum, Billings, Montana. Both exhibition and catalogue are supported in part by grants from the Institute of Museum and Library Services, the National Endowment for the Arts, the Andy Warhol Foundation for the Visual Arts, the Elizabeth Firestone Graham Foundation, and numerous private sponsors.