Home / TAM Blog / Curatorial / Work in Progress: Behind the Scenes of Forgotten Stories 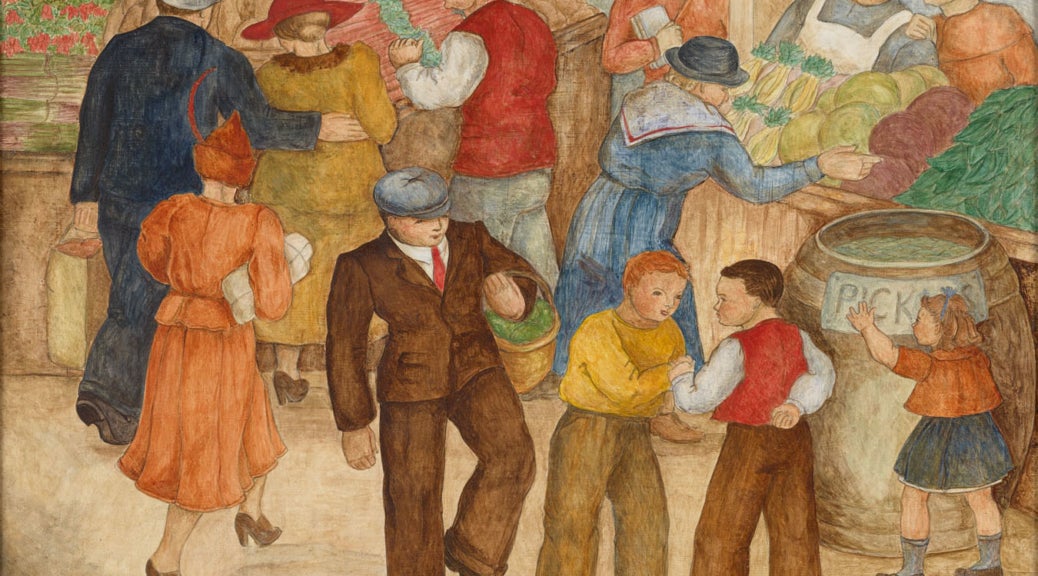 Developing museum exhibitions can take years, and sometimes, as in the case of Forgotten Stories: Northwest Public Art of the 1930s, they can take decades. Over 18 years ago, Interim Chief Curator Margaret Bullock began the research that would result in the new exhibition opening on February 22, 2020. At that time, she was an assistant curator at Portland Art Museum.

“It was the project that the other curator didn’t want to do,” notes Bullock as she describes researching artwork from the 1930s New Deal art programs from the Northwest that ended up in the collection of Portland Art Museum (PAM).

PAM had received a grant from the Henry Luce Foundation to produce a series of brochures on aspects of the museum’s American art collection. Although she had minimal interest in artwork from this era, she knew it would be good experience. The grant also included funding for research, which led Bullock to the National Archives in Washington D.C.

Upon arriving at the National Archives, she was surprised to learn that the information she was seeking was scattered through copious files. She quickly realized that this was a vastly larger project than anyone had ever expected as no one had done any significant work in this area of study.

Back at PAM, Bullock worked alongside a graduate student who was researching photographer Minor White for her master’s thesis. The student had found a cryptic note in a file in the PAM collection records that led her to boxes containing the photo archive of the Oregon Works Progress Administration (WPA). Unknown to anyone, these records had been living in a closet in the old Masonic Temple next door to the museum since the 1950s. Among them were the negatives of some of Minor White’s earliest photographs.

“We were floored,” notes Bullock. “The more we looked, the more exciting it became. And that’s where my obsession with knowing more about these art projects really got started.” The brochure led to a symposium, exhibition, and more research until Bullock left PAM.

When she joined the staff at TAM several years later she picked up the project again. Fellow enthusiast David Martin, curator at the Cascadia Art Museum whom she had met while doing the original research, encouraged her to widen her focus to include the artists working on the federal art projects in Washington State. With support from former Executive Director Stephanie Stebich and Director of Special Northwest Projects Rock Hushka, Bullock continued her research over the years with various trips to D.C.. With support from the Luce Foundation and eager help from other scholars working on various aspects of the New Deal art project history in the Northwest, Bullock embarked on creating the exhibition and book. “There was never really any master plan that led here. It was something that just continued to grow and reveal itself over the years.”

During her years of research in the National Archives, she came across letters which gave her glimpses of the people, stories and politics behind the scenes. The voices in the correspondence started to reveal personalities and she could trace how relationships were built over time, from formal business acquaintances to friendships. “The human side of the story really became fascinating to me,” noted Bullock.

Putting this exhibition together has been a series of surprises. While many people are familiar with the government-sponsored murals which can be found on the walls of post offices in small towns throughout the Northwest, the scale and impact of government sponsored funding of art and artists in the 1930s was almost unknown. “It’s surprising how many artists were involved and how many artworks were created. The information is so fragmented but when it is put together, the full scale of what happened is astonishing. More than 600 artists, over 2,000 artworks. And new things are being discovered all the time since there are more than a thousand artworks that we still haven’t located.”

When Forgotten Stories: Northwest Public Art of the 1930s opens at TAM Bullock believes even more will be found and new artists added to the roster. “The treasure hunt isn’t over.”