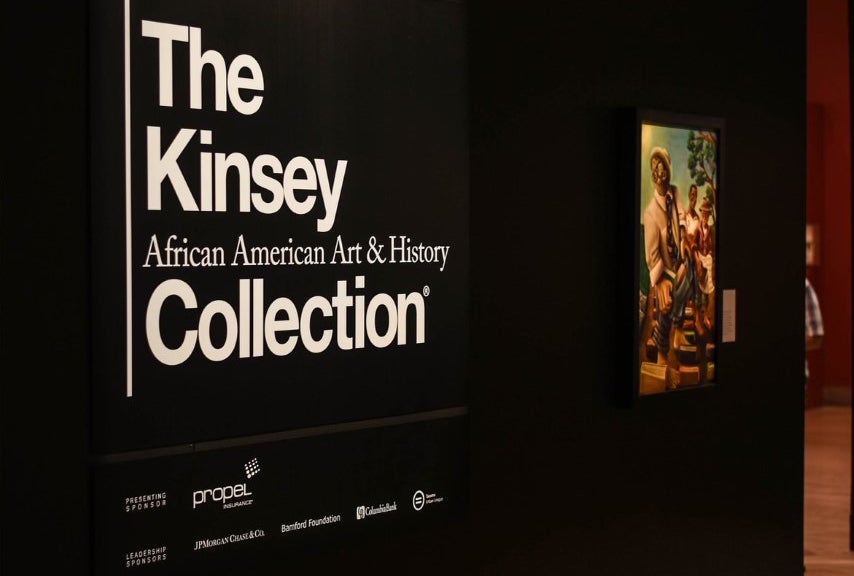 With The Kinsey African American Art & History Collection, connections run deep. No matter where it travels, the works featured in the show offer an opportunity to delve into the unique Black histories of the communities it touches. Tacoma is no different. Because of this important exhibition, we are able to truly explore the impact that our city’s Black community has had in the fight for equity, justice, and human dignity. The groups and individuals listed below are but a small sample of those who have helped shape Tacoma through their commitments to public service.

BLK WINS is an educational platform that explores historic victories within Black history. Originally based in Tacoma, BLK WINS aims to challenge the ways in which Black history has been taught in schools by introducing a new curriculum that shifts the focus away from the common and well-known historical traumas experienced by Black Americans in the United States. BLK WINS was established in June 2020 and founded by Aaron Pratt, Jazmyn Pratt, Perry Porter, and Chris Lee Hill.

In partnership with the Tacoma Art Museum and The Kinsey African American Art & History Collection, BLK WINS produced an episode that highlights a selection of notable Black figures who helped contribute to the Black community in Tacoma throughout the years. Featured in this episode: Judge Jack Tanner, Dr. Maxine Mimms, Nettie Asberry, The Black Collective, The Black Panther Party Seattle Chapter, and T’wina Nobles.

In addition to the selection of notable Black figures from the Tacoma community featured in this episode of BLK WINS, there is no shortage of local activists who have made an impact in our community over the years. Following is a selection of others, both past and present, who are recognized in the gallery for their contributions and the mark they have left on the history of Tacoma and the South Sound.

Kenzie Jones has been a community activist since the age of 14. They are passionate about social justice issues, especially Black Lives Matter, and are working to bring reform to schools and educational systems in Washington State. A student at Central Washington University, Kenzie is also a member of the Youth Education Board. They have been particularly active in regional protests in the past year and organizing meetings with community members to induce change at the local and national level.

Rosa Franklin served the 29th Legislative District in Pierce County which includes South Tacoma, Parkland, Manitou, and portions of Lakewood and University Place. She first served one term in the House of Representatives before being appointed to the Senate in 1993 and then selected to an additional term while serving until 2011. Franklin served as President Pro Tempore in the Senate, Senator Franklin focused on health care and social justice during her tenure in the Legislature.

Senator Franklin had a 42-year career as a nurse before running for office and was instrumental in launching the nursing program at University of Washington, Tacoma. She continues to be active in political and community affairs. Franklin Park at 1201 S. Puget Sound Avenue was recently renamed Senator Rosa Franklin Park in her honor.

Harold Moss is one of Tacoma’s most respected public figures. He was Mayor of the City of Tacoma and the first Black member of the Tacoma City Council where he served for more than 13 years. Mr. Moss also served on the Pierce County Council and was First Vice President and President of the Washington State Association of Counties. Among his other roles in public service, he was the Deputy Executive Director of the Tacoma Urban League for many years and was a past President and long-time board member of the Tacoma branch of the NAACP. Mr. Moss was also an active member of numerous social and cultural organizations, seeking always to mentor, support, and encourage others.

Moe’Neyah Holland is the Executive Director at Teens in Tacoma where she strives to improve the community by highlighting the artistic potential of Tacoma’s teenagers. She attended Curtis High School and now studies art history with a minor in French translation at the University of Washington, Seattle with the goal of changing methods of curation by focusing on African American artists and sparking reform at contemporary art museums. Moe’Neyah also serves as Director of Race Relations on the Youth Education Board and is a member of Girls with a Vision. She was recently given the Labor of Love Award by the MLK County Labor Council.

Lyle Quasim has been Chair of the Pierce County Black Collective since its inception in 1970. After serving in Vietnam as an Air Force medic, he settled in Tacoma and began working in health services and social service policy for county, state, and federal governments with the hope of bringing more attention to the disparities caused by race, class, and gender.

Mr. Quasim has held numerous leadership positions in public health and administration in Tacoma, Pierce County, and the state of Washington, including Director of the Washington State Psychiatric Hospitals and working as a cabinet member for two Washington State governors as Secretary of the Washington State Department Social and Health Services. He also served as Chief of Staff for the Pierce County Executive for eight years. Mr. Quasim then became President of Bates Technical College and Senior Advisor to the Chancellor of University of Washington, Tacoma. Though now retired, he continues a life of public service and community involvement.

Carl Brown was hired at Tacoma Community College (TCC) as Director of Minority Affairs in 1969. He began his teaching career at the Gatesville State School for Boys in Central Texas. He relocated to Tacoma in 1965 where he taught English and current affairs in the Clover Park School District before joining the administration at TCC. There he worked for 20 years, holding a number of administrative positions.

Dolores Silas had a long and distinguished career as an educator and public administrator. She started as a teacher then became Principal of DeLong Elementary School, the first Black woman to serve as an administrator in Tacoma Public Schools. A trailblazer, she then went on to become the first Black woman to serve on the Tacoma City Council and then its first Black Deputy Mayor. She was also long a voice for racial equity and justice in the local community including her role as president of the Tacoma chapter of the NAACP. In 2019, she was honored with a Lifetime Service Award from the City of Tacoma and a Star of Destiny Award from the Tacoma Historical Society. In 2020, the Tacoma Public Schools Board of Directors voted to change the name of Woodrow Wilson High School to Dr. Dolores Silas High School in honor of her many contributions to education in Tacoma.

Tacoma Art Museum mourns the passing of Dr. Silas, who passed away in her home on July 24 at the age of 94.

Thomas Dixon first came to Tacoma to serve at McChord Air Force Base. IN 1966, he became the first director of the Hilltop Multi-Service Center and in 1968 became the inaugural executive director of Tacoma’s new affiliate of the National Urban League. He held the position for 34 years, working tirelessly for economic development, job training, and social services. Mr. Dixon was also a prominent voice in the struggle for racial and social equity and for progressive change in Tacoma. He helped form and served as a mentor for The Black Collective, a weekly gathering of Black civic leaders.

Victoria Woodards, Mayor of Tacoma, was elected in 2018 after serving for seven years on the Tacoma City Council. She also currently serves as Second Vice President of the National League of Cities, on the advisory board of the United States Conference of Mayors, and as a co-chair of the Women Mayors Leadership Alliance.

Mayor Woodards is a graduate of Tacoma’s Lincoln High School. She has served as president of the Tacoma Urban League and as a director of community development for the Tacoma Rainiers. Her past civic engagement work has also included leadership positions with the Tacoma Metropolitan Parks Board, the Washington State History Museum, and the Washington State Commission of African American Affairs.