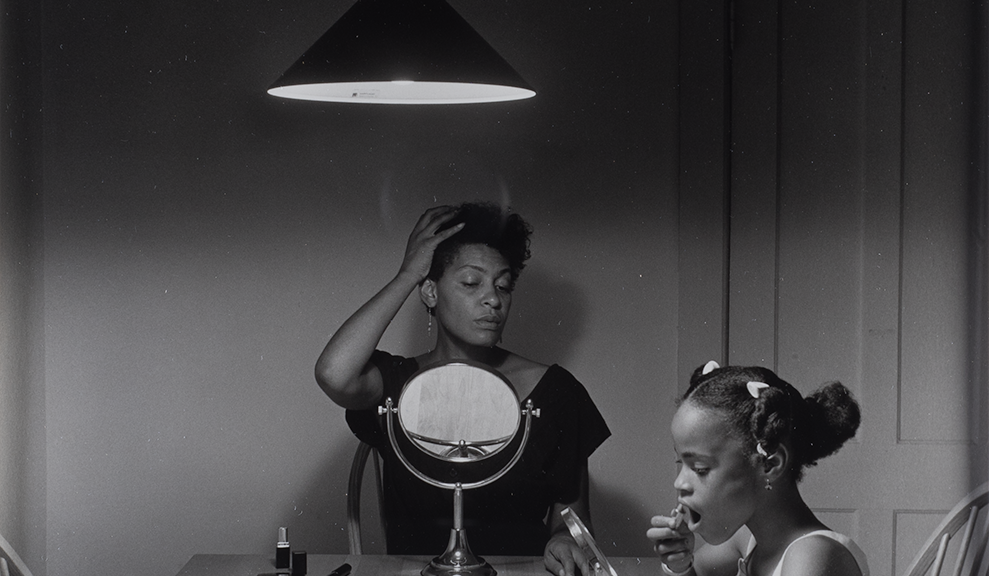 Tacoma Art Museum’s photography collection currently numbers around 450 works dating from 1905 to the present and includes a range of photographic processes from early chloride prints and photogravures to recent digital technologies. In the past year we have added a number of wonderful new images but notably we have been fortunate to add groups of work by two prominent Northwest-born photographers: Imogen Cunningham and Carrie Mae Weems.

Carrie Mae Weems was born in Portland, Oregon in 1953. She earned her BFA from the California Institute of the Arts, Valencia (1981), and an MFA from the University of California, San Diego (1984). She also studied in the Graduate Program in Folklore at the University of California, Berkeley (1984–87). Her interest in photography rapidly expanded to include text then installation, video, audio, and other media. Through all these variations her works have continued to raise questions about race, cultural identity, power systems such as classism and sexism, and the complicated bonds of family relationships and history.

Weems’ s list of achievements to date is extensive. She has participated in hundreds of solo and group exhibitions at major national and international museums. She also has received numerous awards, grants, and fellowships, including the prestigious Prix de Roma. In 2013 she received a MacArthur Foundation “Genius” grant as well as the Congressional Black Caucus Foundation’s Lifetime Achievement Award and to date, she has received five honorary degrees. Her work can be found in public and private collections around the world.

Including the most recent gifts, TAM now has five works by Carrie Mae Weems spanning from 1990 to 2020. Untitled (Woman and Daughter with Make-up) is the earliest and is from her Kitchen Table series that documented a woman’s daily life and her many roles.

Two images document her travels: Untitled (Box Spring in Tree) from the series Sea Islands, was shot in 1992 when Weems traveled to the coasts of Georgia and South Carolina while studying folklore and became interested in the Gullah culture of the Sea Islands, a group known to have extensively preserved their African heritage. She extended these investigations to Africa in 1996 creating a series of images of the organic architecture of Djenné, Mali, one of the oldest urban sites in Western Africa.

Two other new acquisitions add more recent work. Not Manet’s Type (2001) is from a series of five images that combine photographs with statements that comment on the ways in which male artists have used or excluded women in art and particularly the history of Black women in modern art.

MJB, Reflection is a portrait of singer-songwriter Mary J. Blige. Weems interviewed and photographed Blige in 2017 for W Magazine and out of that encounter has come an ongoing series of images. Both Weems and Blige share an interest in documenting and celebrating the role of Black women in the entertainment industry. Through this collaborative series they draw attention to ongoing issues of erasure and gender power dynamics as well as strength, talent, and achievement.

For additional images and information on Carrie Mae Weems and her work visit her website at www.carriemaeweems.net.