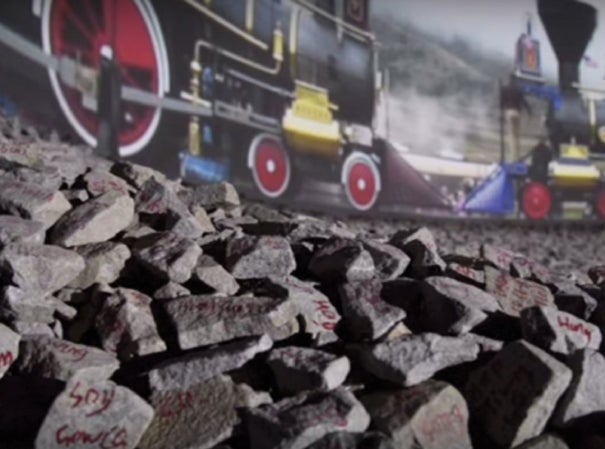 Internationally acclaimed Northwest artist Zhi LIN has refocused attention on the overlooked yet vital history of the Chinese laborers of the 19th century. Thousands of men migrated from China to seek fortunes in the gold mines of California but, instead, mainly found work building the transcontinental railroads. Celebrated as a technical marvel in its day, the first transcontinental railroad was constructed from 1863 to 1869, due largely to the contributions of Chinese workers who cut through the mountains and deserts of the American West. The absence of Chinese laborers from American history books is an animating force in Lin’s work.

In 2005, Lin began exploring this history with watercolor sketches of the landscape along the route of the first transcontinental railroad through California, Nevada, Utah, and Wyoming. Then, he looked to the Golden Spike Ceremony, an annual reenactment of the joining of the Union Pacific and Central Pacific railroads at Promontory Point, Utah. Like most American history texts on the railroads, the contributions of Chinese migrants are nearly absent from the annual ceremony. Lin’s installations about the Golden Spike reenactment combine painting, video projection, and sound; he projects video of the ceremony and the “wedding of the rails” onto his canvas of the railway.

Names of individual laborers are painted onto the ballast (rocks used along the railway). The names of these workers have been largely lost to history, except for the few that were recorded in the railroad pay records or the account books of labor brokers.

In 2013, Lin began to paint abstractions that marked the tragedies and casualties resulting from the dangerous work completed by Chinese migrants on the transcontinental railroad across the Sierra Nevada Mountains in California, including Cape Horn and Donner Summit. Based on his experience of tracing the footsteps of the workers, he used found objects and cutout shapes as stencils to apply ink and colors to Chinese paper to reference the workers. Through his layering technique, he created textures that evoke Chinese textiles and remind viewers that Chinese people were integral to completion of the railroads and the history of the American Westâ€”truths that are often overlooked.

Lin’s paintings resonate in our region. Their content is amplified by the legacy of historical racism exacerbated by contentious labor relations during the construction of the railroads, and the ensuing Chinese Exclusion Act of 1882. The law forbade ethnic Chinese from migrating to the United States; it was not repealed until 1943. Such laws encouraged acts of violence and vigilantism against the Chinese migrants already living here, including the forced expulsion of Chinese people from Tacoma in 1885.

Lin studied printmaking at the China Academy of Art in Hangzhou. In 1989, he earned a Higher Diploma in Fine Art (equivalent to a master of fine arts degree in the US) from Slade School of Fine Art, University College London. In 1992, he also earned a master of fine arts degree from the University of Delaware. Today, Lin teaches painting at the University of Washington as the Floyd and Delores Jones Endowed Professor in the Arts. He has been awarded major grants from the Creative Capital Foundation, Lila Wallace–Reader’s Digest Artists at Giverny program, Art Matters Foundation Fellowship, and the National Endowment for the Arts. His works are in the collections of the Princeton University Art Museum, the Pacific Asia Museum, the University College London Art Collection, the National Fine Art Museum in Beijing, and the China National Academy in Hangzhou, among others. This exhibition is generously supported by Propel Insurance and the National Endowment for the Arts. Seasonal Support is provided by ArtsFund.