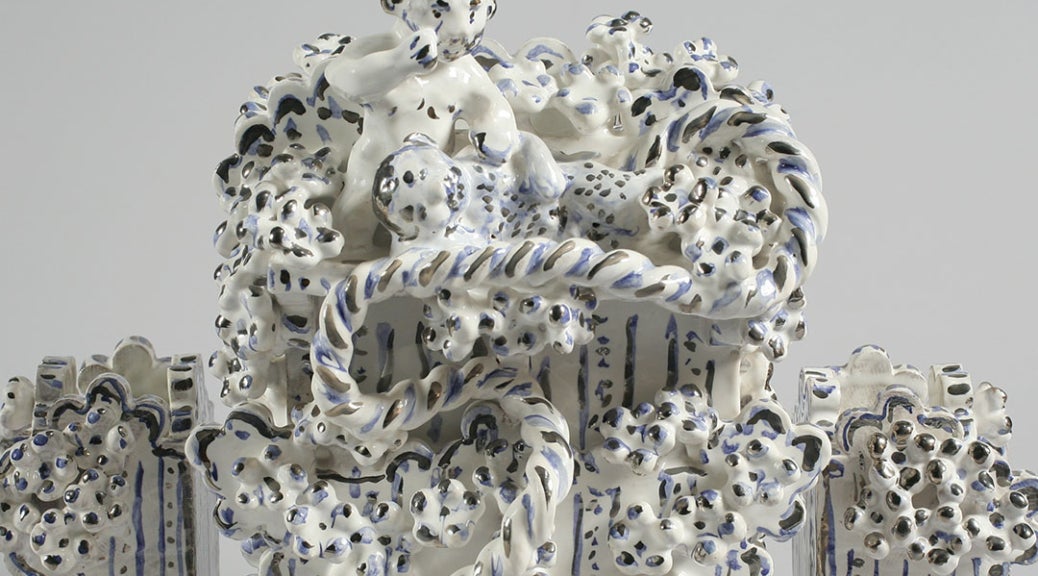 Jeffry Mitchell crafts his art with a seemingly casual aesthetic that underscores his understanding of the history of art and contemporary culture. Working primarily in ceramic, Mitchell is well versed in the medium’s history and traditions from around the globe. His style is immediately recognizable with works that embrace accessibility while making powerful connections to theories of gender, queerness, feminism, religiosity, spiritualism, and psychoanalysis. Reoccurring motifs like rabbits, elephants, stuffed animals, flowers, and religious iconography amplify his attempts to understand the complexities of our shared human experience.

Mitchell’s deft use of traditional forms and familiar imagery as a storytelling device is readily apparent in “Seasick Sailors and the Silver Cord.” This work utilizes the decorative vase form and Mitchell’s favored flowers to explore the physical and mental toll of the AIDS crisis on the queer community. At the top of the central form, two men are visible among a variety of floral shapes. The men, one seated and cradling the head of the other in his lap, are connected to the bottom of the sculpture by a winding cord that weaves through additional sections of flowers on the face of the work. The cord, according to Mitchell, represents a “connection between a higher self and the physical body. [It is] a reference to out of body or near-death experiences and a connection to a metaphysical realm.” When understood in the context of the AIDS crisis, Mitchell’s incorporation of spirituality presents the male figures as both otherworldly and relatable. The men’s positioning, evocative of tenderness between them, is suggestive of both love and loss.

This reflective tone is amplified by the title “Seasick Sailors and the Silver Cord.” An alliterative poem full of emphatic “ess” sounds, it is reminiscent of defensive, animalistic hissing indicating impending danger. On top of the menacing sounds, the phrase seasick sailors is borrowed from Bob Dylan’s “It’s All Over Now Baby Blue.” For Mitchell, the song is sneering and cynical. The lyrics are symbolically rich as they trace a journey of spiritual renewal after trauma or chaos. Considering the relationship between the title and the imagery, Mitchell writes: “I made it thinking about HIV wiping out so many and the obituaries in the gay newspapers. Page after page every week for more than a decade, it read like a high school yearbook. So the piece is sort of mixture of doom, nostalgia, and transcendence.”

Jeffry Mitchell has received critical acclaim for his mastery of painting, printmaking, sculpture, installation, and ceramics. He earned his Master of Fine Arts degree in printmaking from Temple University, Philadelphia in 1988. He has had one-person exhibitions at Henry Art Gallery, Seattle Art Museum, and the New Museum, New York. Mitchell has been artist-in-residence at the Pilchuck Glass School, Rhode Island School of Design, and Harvard University, and he has taught art at the Emily Carr Institute, the University of Washington, and Cornish School of the Arts. His work can be found in numerous private and public collections including the Smithsonian American Art Museum,  Seattle Art Museum, Philadelphia Art Museum, Museum of Fine Arts, Boston, Philadelphia Art Museum, Fogg Art Museum (Harvard University), Honolulu Museum of Art, Tacoma Art Museum, and the Portland Art Museum.