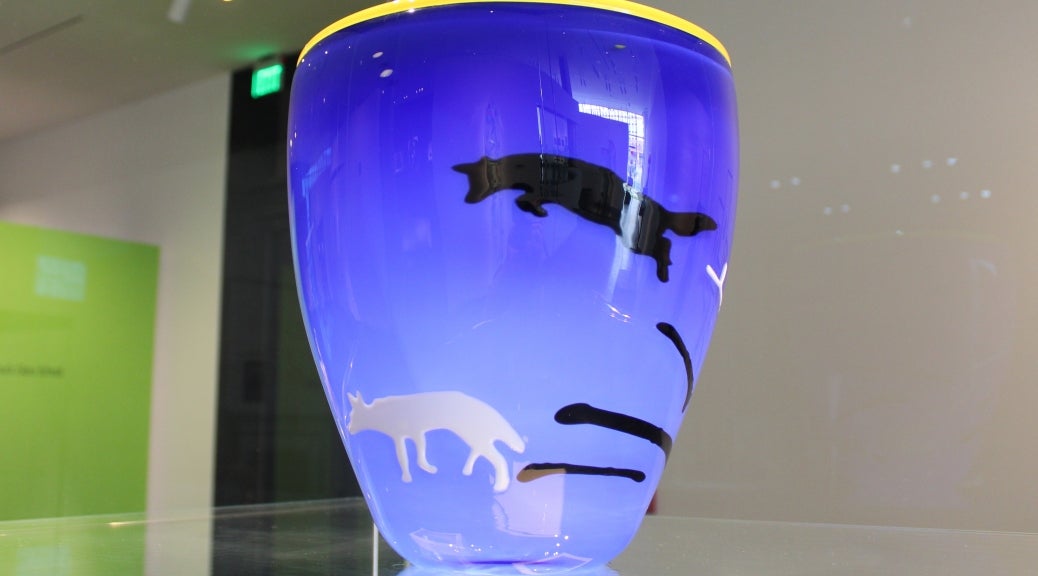 RYAN! Feddersen routinely pushes the boundaries of art with very conceptual, immersive, and interactive installations. The artist engages viewers with new ideas and concepts and ways of understanding the world (and outer space, at times). Her work implores consideration of social and environmental justice issues often with a subtle humor and irony. These are just some of the many draws to her work, which are among the many reasons why I invited her to participate in the exhibition The Naturalist and The Trickster: Audubon/RYAN!, which opened at Tacoma Art Museum on February 1, 2020 and closed early on March 13, 2020 due to the pandemic. Although the exhibition is no longer on view, TAM is currently providing a virtual opportunity to explore the exhibition on Matterport as well as a video interview with the artist in the gallery. Both resources can be accessed from TAM’s website. The highlights of the exhibition included the Coyote Now Epic, a monumental 75-foot long mural, and ten glass baskets that were recently completed during the artist’s residency at the Museum of Glass. TAM also marked the importance of the artist’s work through the recent acquisition of Coyote Restored in Starlight, a beautiful blue glass basket that was made in 2019 during her residency at MOG.

The symbols and imagery in Coyote Restored in Starlight relate to the Coyote Now Epic mural that was on view at TAM in 2020. The Coyote Now Epic mural is part of a series that the artist first exhibited as a hands-on art activity at TAM Studio in 2015. The now expanded narrative mural follows the main character of Coyote on a journey throughout the American West which is represented through images of the Hanford Site, Bears Ears National Monument, and other western environments. This iteration of the story opens with Fox jumping over coyote bones, an act that resurrects the protagonist. This very scene of Fox jumping over the Coyote bones is the imagery that appears on the recently acquired glass basket Coyote Restored in Starlight.

The story of Coyote is just one of the connections between the basket and Native American art and culture. The entire collection of glass baskets that Ryan made during her MOG residency mirrors the shape of Native American burden baskets in varying sizes. Coyote Restored in Starlight is 12-inches high with an 11-inch diameter. Fox and the bone images appear in black and white on the blue glass basket and there is a bright yellow band along the top rim of the basket. It is the only blue glass basket that she made during the residency and the creative reinterpretation of Native American basketry is important to note. In this realm, Ryan follows in the footsteps of several well-known Native American artists, and Northwest artists in particular, including Preston Singletary, Dan Friday, and Liliane Pitt, among others who have reinvented basket making techniques that honor communities and ancestral teachings while taking it to new artistic levels.

With TAM now reopened as of April 2021, we are pleased to feature Coyote Restored in Starlight in the ongoing exhibition Metaphor into Form in the Rebecca and Jack Benaroya Wing. There the glass basket can be further contextualized alongside the impressive studio art glass legacy that finds its major home in the Pacific Northwest.