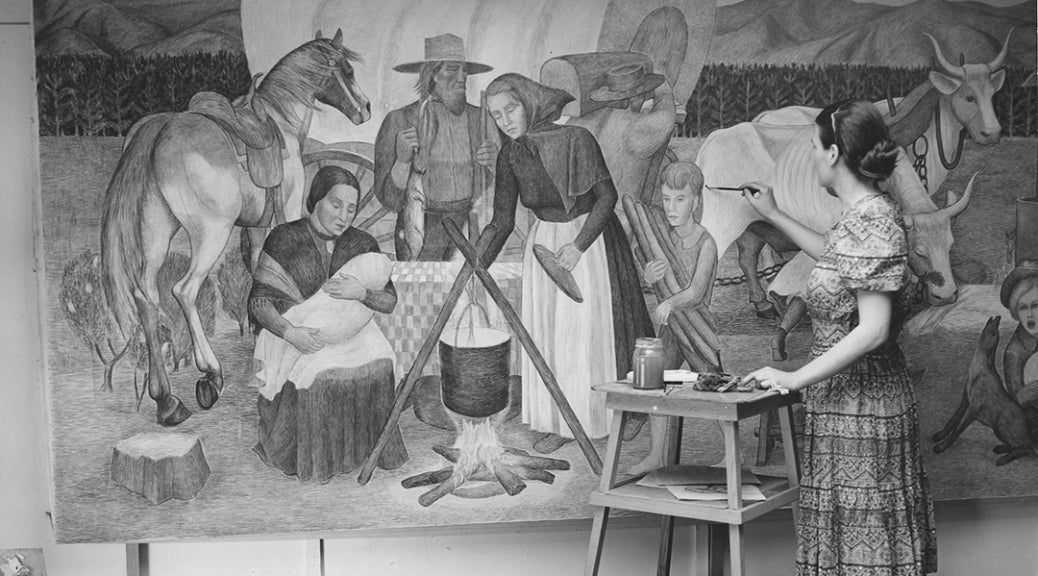 In February, Tacoma Art Museum opened Forgotten Stories: Northwest Art of the 1930s. In the 1930s, government investment in public art and artists in the Northwest supported communities and created a wealth of public art with stories that, until now, were nearly unknown.

Although the exhibition was only available for public view for three weeks, many of its themes have been brought to the forefront of current thinking. Locally and throughout the US, multiple voices have made the call for a new form of the WPA. Here are just some of those:

“As the coronavirus pandemic pushes Washington state unemployment toward 25% — Great Depression levels — many arts and culture advocates say it’s time to reinvent the WPA for the 21st century.”

Can a 21st Century WPA Rescue the Struggling Economy Under a Pandemic? KUOW, by Marcie Sillman, May 6, 2020.

“When the Roosevelt administration rolled out tens of millions of dollars during the New Deal to fund artists, musicians, writers and actors, its mission was more than just job creation. It wanted to create a version of American culture that everyone could rally behind. Music, art classes, posters, plays and photography funded by the federal government were supposed to unite a nation in turmoil.”

“â€¦paying people to find and tell stories promoting shared American values might help with another sickness the country suffers from right now.”

Art of the New Deal: How Artists Helped Define America During the Depression. Boise State Public Radio, by Neda Ulaby, May 25, 2020.

“For decades, the cultural sector in the U.S. has been in a precarious, vulnerable position compared to other industries, she says. In the aftermath of this crisis,â€¦ people may realize it’s not sustainable that funding for art largely comes from wealthy elites or private philanthropy.”

What the Depression- Era Works Progress Administration Can Teach Us About The Arts During A Crisis. WBUR-FM, by Lynn Menegon, April 29, 2020.

“A WPA for our time would not be cheap. But the cost of failing to act boldly may, as Roosevelt so wisely recognized, prove far higher in the long run.”

What would FDR do? We need a new WPA to fight massive unemployment in the coronavirus era. USA Today, by Jerome Karabel, May 14, 2020.

“But nearly a century after FDR included culture as a hallmark of democracy, that aim of radical inclusivity and accessibilityâ€”in which art benefits more people, rather than fewerâ€”should not be the distant vision of a past generation. Instead, it should provide inspiration for how we might adapt the arts once the new challenge of the coronavirus pandemic is overcome. Those ideals can still be attainable in our own time.”

During a Crisis, Is Art Just a Luxury? What the New Deal Has to Teach Us About the Importance of Supporting the Arts. Art News, Jody Patterson, April 20, 2020.

Additional Stories in the Media: