At the end of February, I was lucky enough to get to Washington DC., for a very special event. TAM’s quite outstanding work of art by Edgar Degas – Danseuses, 1879 – was being unveiled at the National Gallery, as one of the centerpieces in the exhibition Degas at the Opéra. which was co-organized by the National Gallery and the Musí¨e d’Orsay in Paris.

Degas painted the dancers at the new Paris Opéra, the Palais Garnier, completed in 1875 in the sumptuous style of the era and commissioned by the Emperor Napoleon III.   It is a magnificent, glittering, imposing palace for music, singers, and dancers, and even today it stands, along with the Eiffel Tower, the Sacré Coeur and Notre Dame, as one of the architectural icons of the City of Light.   Brimming with color, music, movement, costumes, youthful women and musicians, the place was a Mecca for Degas, who loved all of those things. He had trained to be a musician early in his life, before taking to the law (reluctantly, at the insistence of his father) then finally turning to art; and he adored watching musicians, and later dancers, practicing their art.

Degas became known as the painter of dancers, though he often also portrayed horses, music and musicians, and made portraits. The larger oil paintings on canvas, and the bronzes of dancers, are perhaps his best known works. But TAM’s painting is shaped like a fan and painted with a variety of media on silk. During the late 1870s and early 1880s, everything Japanese was at the height of fashion in Paris and London; and many artists – such as Degas – made paintings that reflected the shape of the ubiquitous Japanese fan.

Of the 11 or 12 works in this format made by Degas, TAM’s Danseuses is certainly one of the best. It shows dancers facing the orchestra pit and the audience, while back-stage, a couple of dancers are walking on or off. Stage left, a group of   “flaneurs” (men-about-town) are getting an eyeful of the young dancers close at hand. The artist is posed on a ladder or similar behind a piece of scenery painted to look like a tree.

When I visited the opening of the exhibition in the company of Rep. Derek Kilmer, we were in the company of some of Congressman Kilmer’s colleagues, and museum professionals from around the world. We delighted in Degas’ artistry, and in the odd views and strange compositions that the artist used to bring about his astounding effects of movement and light. These are all amply shown in TAM’s work, which may be why the National Gallery chose it as one of their illustrated highlights (https://www.washingtonpost.com/entertainment/museums/it-was-at-the-paris-opera-that-degas-found-the-whole-world–and-his-own-tormented-self/2020/03/04/eb90e380-5d6c-11ea-9055-5fa12981bbbf_story.html) 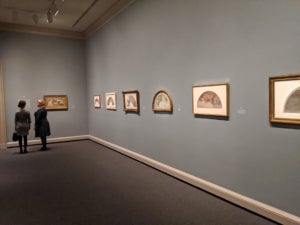 The photos here show (top) Rep. Kilmer and I standing in front of Danseuses (photo courtesy D. Kilmer) and (bottom) the position of TAM’s work of art alongside other “fans” by Degas (photo D. Setford).