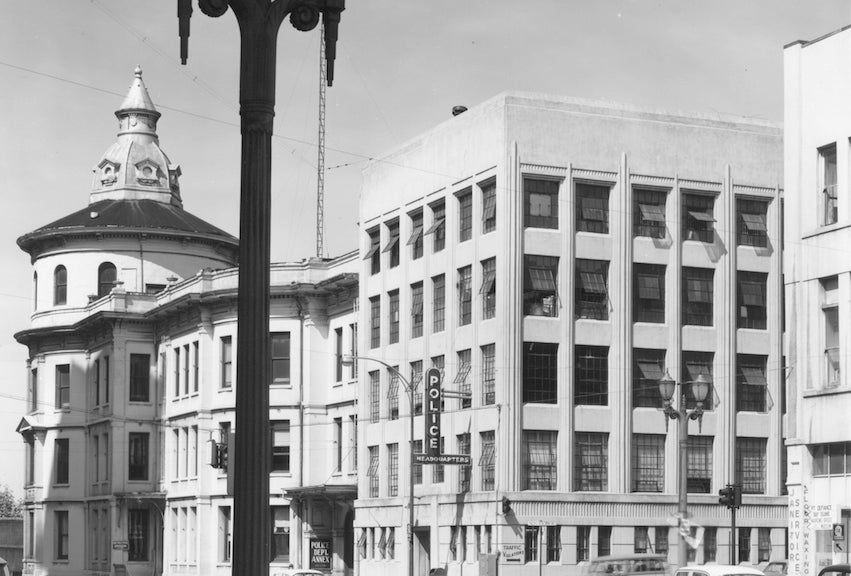 Tacoma Art Museum was founded in 1935 but it was not until 2003 that it moved into a building designed specifically as an art museum. For 68 years the organization adapted to a variety of different settings as its mission and collection grew.

In the early days TAM was known as the Tacoma Art Association (TAA). Its first home, from 1935 to 1958, consisted of several rooms on the top floor in the tower of Jones Hall, the striking administration building at the heart of the University of Puget Sound campus.

The college generously provided the space rent free. Programming focused on exhibitions and art-related talks. Early supporters gamely climbed four flights of stairs to enjoy artwork by regional artists and a variety of art objects lent by local collectors. The university president and his wife provided the tea and cookies for openings.

By 1958 the organization (now renamed the Tacoma Art League) was in need of more space and keenly feeling the constraints of trying to increase attendance and membership while coping with the obstacle of many stairs and no elevator. They decided to rent a storefront at 742 Broadway in what is now Tacoma’s Antique Row.

Motivated to move by the desire to improve art access for all, they ended up appropriately sandwiched between a liquor store and a Bible bookstore. The organization also wanted to proclaim its avant-garde credentials and painted both the ceiling and the walls of the galleries black, earning the unfortunate nickname of “the Black Hole.” Two important events for the institution occurred here. The organization changed its name to the Tacoma Art Museum to signal its intent to move beyond being an exhibition space to a full-fledged museum. They also began accepting donations of artworks to start building a collection.

During the late 1950s several Tacoma civic organizations were working to turn the former city office building and jail at 621 Pacific Street into a hub for the arts in downtown Tacoma.

TAM began renting the second floor in the Allied Arts Center in late December 1963 and opened its first exhibition early in 1964. It was the beginning of the museum’s slow march south on Pacific Avenue to its current location. TAM’s ambitions grew with the larger footprint. They increased the number of exhibitions and programs, added a small art library, and established an art rental business. They also steadily acquired new gifts of art for the collection. As the museum gained stature as a city institution, a number of plans were floated to find it a more permanent home including a site in Lakewood and one in Point Defiance Park. Ultimately, however it was through the generous gift of one family that TAM came to own its first home.

In 1970, L.T. and Helen Murray, Sr. purchased the National Bank of Washington building at 1123 Pacific Avenue and gifted it to TAM.

The museum opened its first exhibitions there in April 1971. The much larger footprint allowed the museum to expand in a number of ways. The basement became the home of a much-loved Children’s Gallery with rotating exhibitions and activities specifically for kids. Upstairs there were several galleries for changing exhibitions and also a number of long term installations of collection objects including an Early American Room. The museum’s leaders and supporters began to dream bigger and brought the first “blockbuster” exhibition to town. It was an enormous success. Between Spring and Summer: Soviet Conceptual Art in the Era of Late Communism opened on June 15, 1990. People lined up around the block day after day to see it and it was reviewed in the New York Times, a first for the museum.

By 1997 TAM’s continued popularity and expanding exhibition and education programs prompted the launch of a capital campaign to construct a new building designed specifically as a museum. Ground was broken at the museum’s current location, 1701 Pacific Avenue, in January 2001 and the doors opened on May 3, 2003, with a twenty-four-hour party for the community.

The core of the building, designed by internationally known architect Antoine Predock, responds to Tacoma’s industrial history and the Northwest environment, particularly the quality of light, the preponderance of water, and the dramatic vista of Mount Rainier. In 2012 the gift of the Haub Collection of Western American Art launched the addition of a new wing on the south side of the building which opened in 2014. And in January of 2019 the museum celebrated the opening of the Rebecca and Jack Benaroya Wing for exhibiting studio art glass which was added on the north end of the building.

Since its founding TAM has been fortunate to find the right spaces at the right times which has helped it continue to grow and thrive. We have just begun to explore what the Haub and Benaroya wings can bring to our future and look forward to developing the new plans and aspirations they are inspiring.