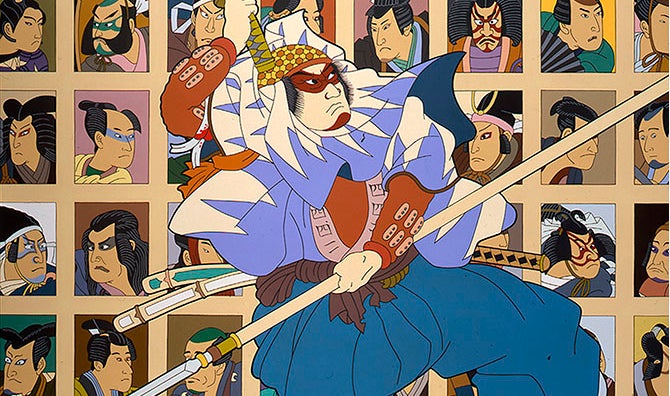 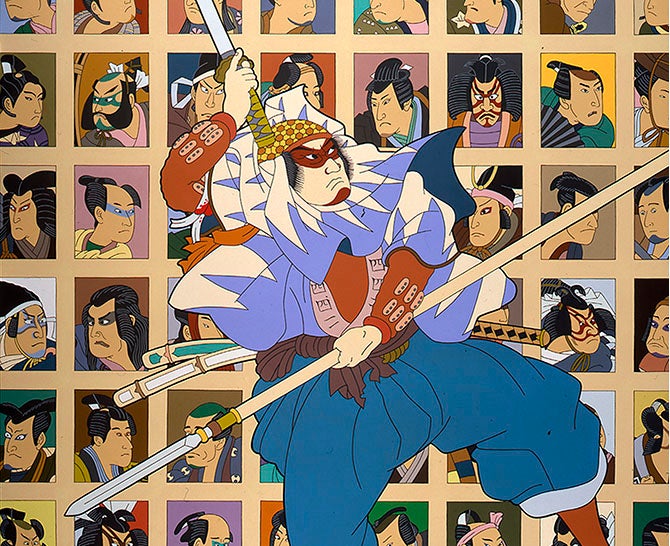 This week, we hear from TAM docent Cathy Wiggins, who reflects on a favorite piece from the museum’s collection, Minidoka No. 5 (442nd) by Roger Shimomura.

This large painting dominates the room anytime it is on view at the museum. It is a highlight of my tours whenever it is up. It is described in the museum’s online collection as a brightly painted samurai warrior with portraits of other warriors in a grid behind. But there is so much more going on here.

This very large painting totally fills your field of view when you are standing in front of it.   The smaller portraits are reminiscent of Japanese wood block prints with large areas of opaque colors. The figure in the foreground is life size and you feel he is ready to jump into action. Young people on my tours relate to this painting maybe because it is reminiscent of action figures. They usually see some dramatic story being told.

Roger Shimomura was born in Seattle in 1939. This made him about 3 when his family was sent to the Japanese relocation camp at Minidoka, Idaho during World War II. Minidoka is a frequent subject of his work. Sometimes he represents himself at a young child on a tricycle. Usually his works inspired by Minidoka include barbed wire, guard towers, and rifles pointed inward. Here Shimomura references the 442 regiment, composed of young Japanese men who were fighting in World War II for the country that imprisoned their families.   These are modern day samurai sent to fight.   I wonder if Shimomura knew any members of the 442.

I find this painting very meaningful today when we are facing another era of questioning what it means to be an American.

Last summer my husband and I dropped by Minidoka on our way through southern Idaho. Not much remains of the camp but I took this picture of a reconsideration guard tower.

Learn more about Minidoka, courtesy of the National Park Service

Learn more about Roget Shimomura, courtesy of the Densho Encyclopedia