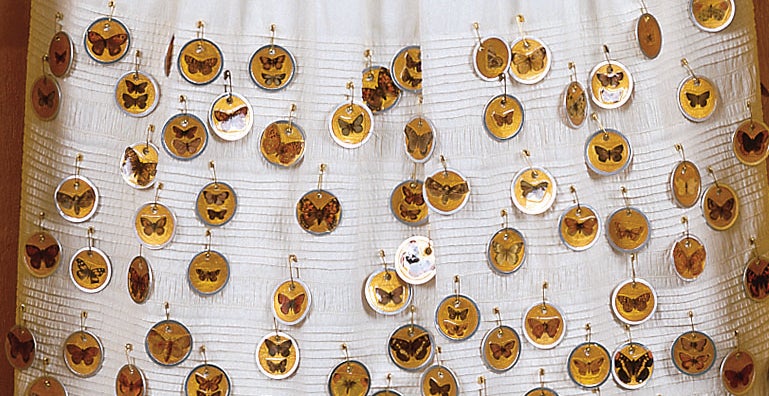 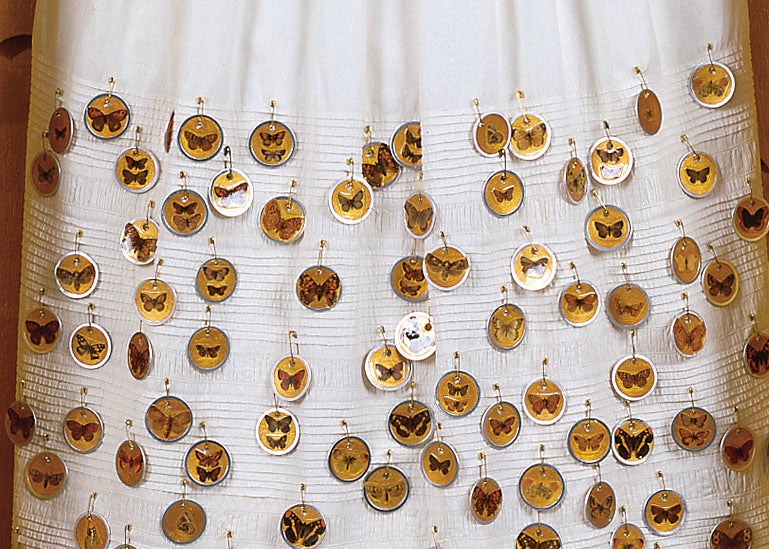 Kathryn Glowen is a mixed-media and installation artist whose work explores memory and time. After the death of her friend Mamie L. Rand, Glowen created a series of artworks that tenderly memorialized her. Rand was a pet store owner, accountant, and amateur musician from Spokane, WA. A bit of a pack rat, she saved and meticulously organized mementos, trinkets, and projects. Living through the Great Depression fostered a frugality that led her to making her own dresses, turning them into aprons as they wore out and then quilting the scraps as they fell apart. She never married or moved from her home, making it easier to keep materials organized and avoid purges over the years.

In the course of creating work inspired by Rand, Glowen accumulated and processed boxes of her collected items, thoughtfully incorporating various aspects in each mixed media work. One of such piece is Dress of Years, which celebrates each of the 101 years of Rand’s long, happy, and productive life. The centerpiece of the work is Rand’s white cotton christening dress. Adorning the skirt are 101 butterfly tags, one for each year of Rand’s life. The tags themselves are made from pages saved by Rand herself.   At the base are photographs captured by Frank P. Rand. Overall, Glowen’s composition summarizes Rand’s personal history, beginning with an infant’s garment and accumulating a century of experiences.

Glowen trained in fine art and graphic design at Washington State University and the University of Tulsa. She has had solo exhibitions throughout the Northwest, notably her major installation Petland: One Woman’s Century in 1997 that traveled to 13 different venues across Washington State and to Fort Wayne, Indiana. She also has participated in numerous group exhibitions in the Northwest, Midwest, and Asia. Glowen works primarily with assemblages of found objects and with textiles, and she has created a variety of public commissions around Washington, including for the King County Justice Center and Swedish Medical Center, both in Seattle; and the Sound Transit station in Auburn.