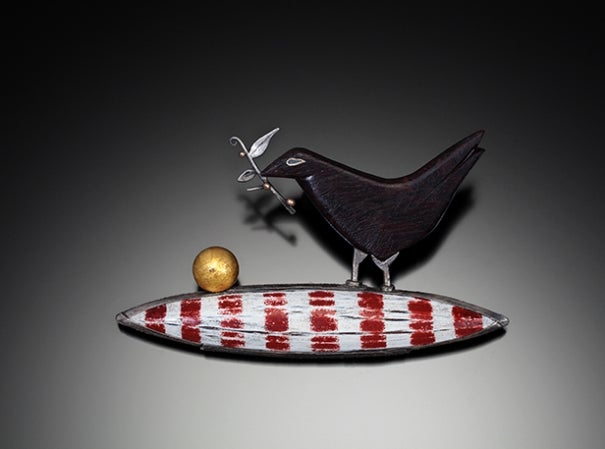 Mia McEldowney (1950–2013), an influential gallerist, curator, and arts leader, worked to advance the Northwest arts scene for more than three decades. Her bold vision for a strong arts community and her eclectic taste continue to influence the evolution of Northwest art.

She operated the admired and respected MIA Gallery in Seattle from 1984 to 1997, which often featured folk art and ethnographic works. McEldowney championed narrative art and its power to connect people through shared experiences. She was captivated by the rich textures, strong colors, and evidence of the maker’s hand in folk art traditions.

McEldowney collected and wore studio art jewelry that she often purchased from her own gallery. Her long-time friend and former gallery director Meg Shiffler recalled, “There was never an issue of whether or not she could pull off a large piece of jewelry because at just 5 feet tall Mia had the kind of glowing spirit and commanding personality that would light up a room. People noticed what she wore and how it made her feel, and often the jewelry became a conversation-starter in social situations.“

At Tacoma Art Museum, McEldowney brought increased attention to Northwest studio art jewelry. She curated the exhibition Under the Influence: Northwest Jewelry and Ethnographic Objects in 2000, and she supported major acquisitions of jewelry, including works by Sharon Boardway, Ron Ho, Micki Lippe, and Mary Lee Hu. She was also a key patron for the open storage jewelry cases in this gallery. Her bequest of 35 works of studio art jewelry memorializes her support of Northwest jewelry artists and her commitment to this form of artistic expression in the region.

This exhibition is organized by Tacoma Art Museum.