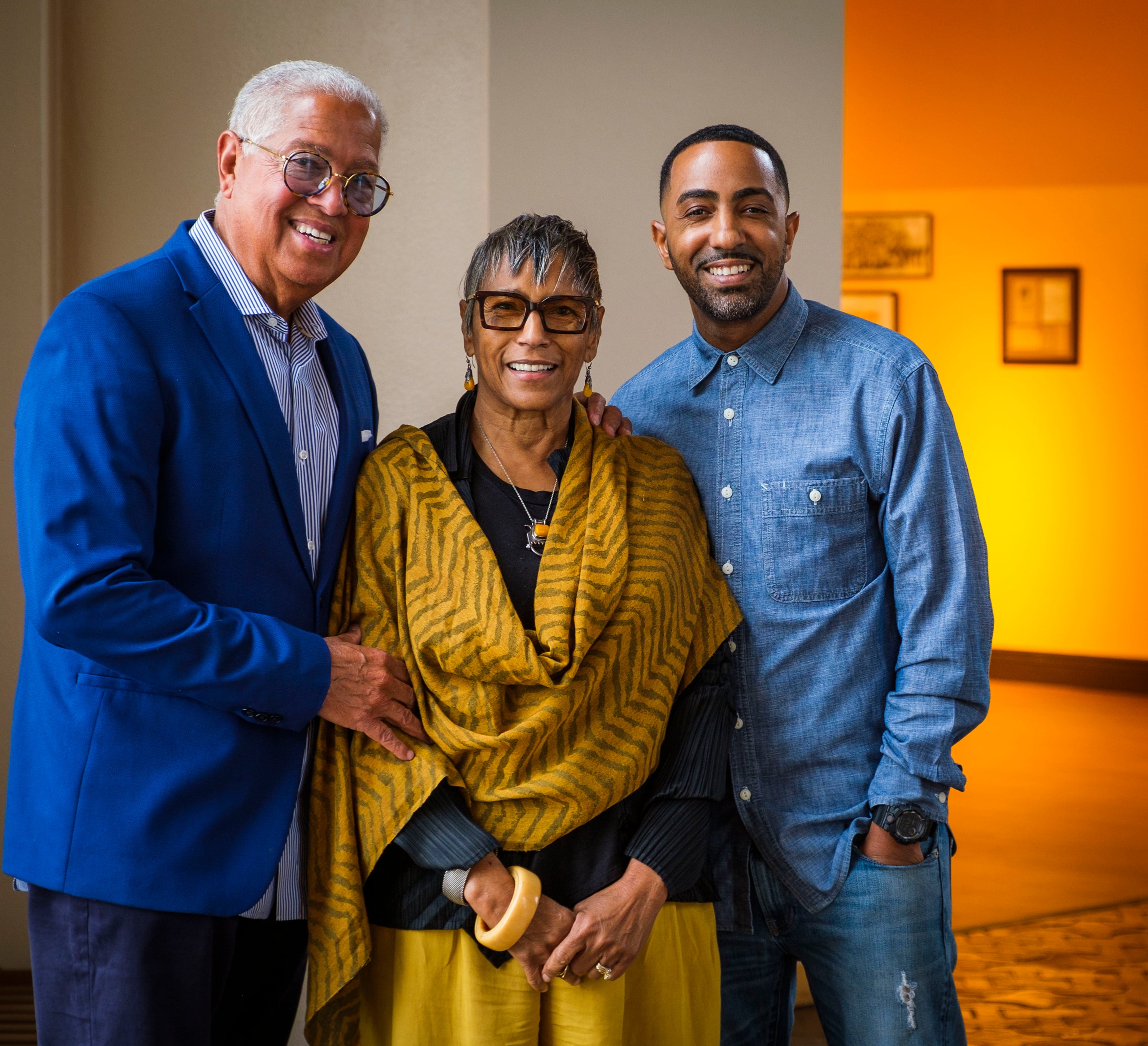 What is your favorite piece in the collection?

Shirley Kinsey [SK]: My favorite piece is The Cultivators. We met the artist, he was a student at the time. We liked his style so we commissioned him to do a piece. This piece is what we got two years later. He said he didn’t want to charge us for it. This was 2002. He said he saw us as cultivators of knowledge, trying to impart wisdom. So he spoke us into existence. He had no idea we were even going to be doing this at the time. Bernard is harvesting books; I’m cleaning them; and then Khalil is reading “The Prophet” by Kahlil Gibran. It has become the logo. Initially, we were using our portraits.

What we’re trying to do is take things that people talk about and we go out and see if it is actually true. And if it is, we bring it in [to the collection].

Crisis Magazine. The NAACP was founded in 1909. These Crisis Magazines were part of W.E.B. DuBois’ efforts to document Black America from 1911. We acquired the entire collection from 1911 to 1955. In every one of these, it describes African American life during that month. And it’s original art on the cover. Of all the things we’ve done, we’ve never had this many Crisis Magazines out of the house.

Why do you think it is so important to share your collection and story with people?

SK: Khalil had a family history report to do and that really was the catalyst for us to say “We don’t really know ourselves at all.” We’ve been collecting from all our travels and learning about other ethnic identities but we didn’t know enough about our own. And still we’re learning. Everyday there’s always something coming up. I always tell young people in the audience, “Please become historians in your own family. Interview your grandparents and parents and church members, any elders that have stories to tell you.”

There are a lot of untold stories you’ll hear us talk about and those are the untold stories that we’d like you to share as you tell your own stories.

“Please become historians in your own family. Interview your grandparents and parents and church members, any elders that have stories to tell you.”

BK: We have had a remarkable journey. We started in 1967 with $26 in a jar, went to California, bought a used car, used furniture, and made a life. That’s what we all have to do is make a life. We made a life by basically saying we’re going to have a partnership and that partnership has been unbreakable for that whole time, for 55 years. We said simply that we’d save Shirley’s paycheck and live on my paycheck. And for the first fifteen years of our marriage that’s exactly what we did. While other people were out doing whatever they were doing, we were buying houses, apartments, commercial buildings, investing in the stock market, and doing the things we all should do to ensure we have a good life. I tell people I read a couple of hours every night even now: I read about Black folks and money. That’s all I read [about]: Black folks and money. Because if you don’t have enough money, you can’t operate in this country and have the kind of identity you need to have a good life. So we really work hard at that.

I am so impressed with what you [Khalil Kinsey] have done here. Going into that exhibit, and this is our 33rd exhibit. I know every one of these pieces intimately because we’ve purchased every one of them. But what you [Khalil] have put together is just extraordinary. The team of Jessica and Margaret [part of TAM’s curatorial team], I can feel your care in walking through there with us. Just the level of detail — and I’m a detail guy– what you all did with the Crisis Magazine. We have one of the largest collections of Crisis Magazine in the country. From 1911 to 1950. We’ve got every one of them. They never come out of the house. Khalil took the whole box.

The beauty about The Kinsey Collection is this notion of family. In 1865, there were more Black two heads of household than in the white community. This notion that Black people don’t care about family is foolishness. We have a saying: “There’s the story that made America and the stories that America made up.” Literally everything you and I got in high school and college history was made up. Because we weren’t in it. So what the Kinsey family has done is document this story from 1595, a young, African American girl named Esther Butler — she has a name — being baptized in St. Augustine. We have a marriage certificate of an African American couple, Augustin and Francisca, being married in 1598. Seven years before Jamestown. So let’s get this story right. You cannot negotiate respect in this country. In other words, if you don’t respect me, we’re never going to have an eye-level relationship. What The Kinsey Collection is trying to do now is to give you enough information to be able to have this eye-level conversation. Black people; white people. Latinos. Because we start in Patagonia and we go all the way to Canada. We have documented this story — we stopped in Canada because Canada was the only country in North America that didn’t take people, enslave them. That’s why I love Canadians — That’s what this story is about.

The Trojan horse is to come see The Kinsey Collection which, by itself, will knock your socks off. What we’re really trying to do is to change the narrative about the African American story in America. We’ve documented this story meticulously. From 1595 to the present.

When we went to Disney, we did a five year show with Disney. Within six months of the three year deal, the CEO of Parks called and said, “Mr. Kinsey, we’d like to renegotiate the contract. We want this to stay for five years.” Because it’s that powerful. 67,000 employees went through The Kinsey Collection at Epcot. That’s the power of it.

We have another saying, “There’s no such thing as ‘Black’ art or ‘White’ art. It’s just art.” If White people would stop putting labels on us, we’d get over it pretty quick. But the problem in this country is if you are Black, you are not going to outrun that. Your skin speaks before you do.

In talking about the collection, you talk a lot about the “myth of absence.” Can you dig into a little bit of what that means? And how do you feel like that ties in with the concept of agency?

BK: “The myth of absence” is a simple concept that African Americans are invisibly present in the United States. What do you think that means? It means that we’re here, we’re just not part of the narrative; we’re not part of the picture; we’re not part of the thought process that goes on in everyday life in America. And guess what? We should be. Because we’ve fought in every war since the founding of this country. Here’s where we go. I’ll give you one little story. There’s a brother named Thomas Jennings. Thomas Jennings invented dry cleaning in 1821. He was the first Black man to receive a patent in these United States. Now that’s pretty significant by itself. But let me tell you why I really love Thomas Jennings. He married Elizabeth Jennings. She started the Harlem Childcare Center which took care of thousands and thousands of kids in Harlem in the 1850s. They had a daughter named Elizabeth Jennings. Let me tell you what Elizabeth did. In 1856, Elizabeth was on a streetcar in New York city and said that she was not going to get off the streetcar just because she was Black. They insisted and she sued. She won this case and integrated the streetcar system in New York City in 1856. One hundred years before Rosa Parks. This thing [the exhibition] is layers and layers.

There’s another brother named John Parker who bought his freedom for $1800, moved to Cincinnati, had six kids. All of them went to college. In 1860. In Ripley, Ohio. That’s what this is about. Because when you give people a foundation, they can move. It’s called freedom. But you’ve got to have some sense of agency; and, that’s what Black people in this country want: agency. That’s what The Kinsey Collection is about. You’re going to leave and say, “I didn’t know that.” That’s all we want: to readjust your thinking in terms of how you perceive the African American story of contribution and achievement and accomplishment. That’s what this is about. It’s not about struggle. Struggle is something you need to get through, not stay in. Sometimes Black people, we get caught up in the struggle. I don’t want to talk about struggle. “Small dreams, small obstacles, small payoff.” What you want are large dreams, large obstacles, and tremendous payoff. You cannot have that unless you change how you think about yourself. One of the things we do in The Kinsey Collection is talk about how we motivate you to do more with your life. That is underlying this story of accomplishment and achievement that Khalil and the team at TAM have put together.

The Kinsey African American Art and History in Collection is on view at the Tacoma Art Museum from July 31 through November 28, 2021.