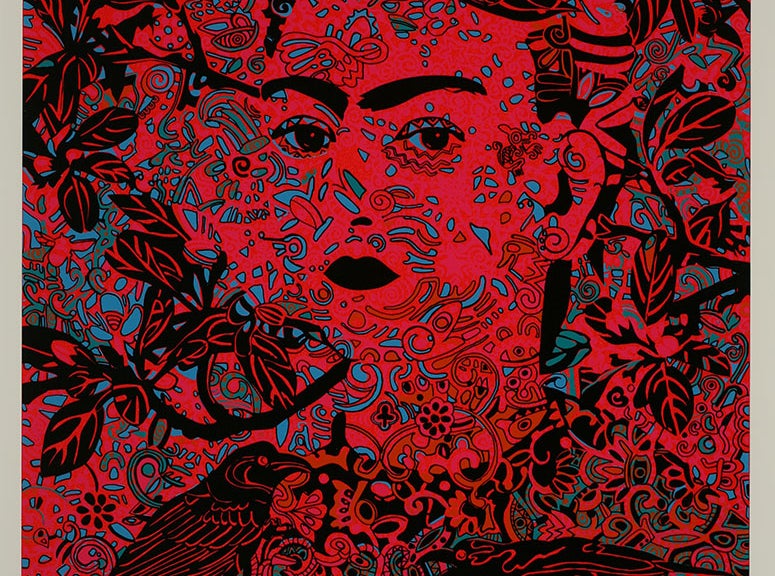 The bold, bright red and accents of blue in Alfredo Arreguí­n’s portrait of artist Frida Kahlo emit a vibrant, powerful image that is not anything new for Arreguí­n’s portfolio. His use of various abstract designs and floral patterns create a lively, yet subtle portrait that Frida seems to simply melt into given a lack of solid lines, besides the features of her face and the three black ravens that surround her. Frida’s Messengers is one of Arreguí­n’s many prints of this important artist born just under three decades before him and only 200 miles apart in their home country of Mexico. Arreguí­n draws on various styles of art such as pre-Columbian, Japanese woodblock, Islamic tiles, and the form line drawing style of indigenous art in the Pacific Northwest to make his unique, vivid works like Frida’s Messengers and Rio Balsas, which can both be found in TAM’s permanent collection.

Alfredo Arreguí­n attended the prestigious National Preparatory School in Mexico where the renowned painter Diego Rivera (1886-1957) had been a teacher and the artist Frida Kahlo (1907-1954) a student. In 1956, he moved to Seattle to attend the University of Washington where he received his Bachelor of Arts in 1967 and his Master of Fine Arts in1969; he later taught in the School of Art. In 1980 Arreguí­n received a fellowship from the National Endowment for the Arts and in 1995 received an OHTLI Award given by the Mexican government to distinguished individuals who contribute to Mexican culture abroad. In 2008, he was honored with a lifetime achievement award from the University of California, Riverside. His works are part of the collections of the National Museum of American Art and the National Portrait Gallery.