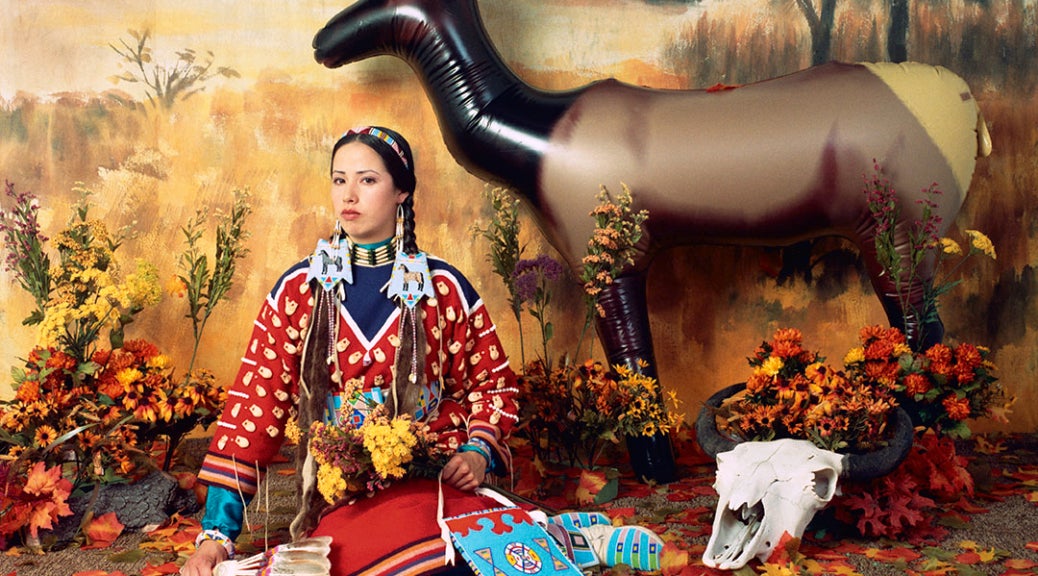 In her Four Seasons series, Wendy Red Star (Apsáalooke Nation, born Billings, Montana, 1981) creates diorama-like portraits, depicting each season. In this specific work, Fall, Red Star has set up a fake autumn backdrop, with leaves scattered around her, a plastic blow-up elk, and an animal’s skull to the right. Red Star has explained in interviews that she was inspired, or rather, motivated to create these scenes after visiting the Natural History Museum of Los Angeles County and seeing her culture made up into dioramas, next to natural artifacts like dinosaurs and other extinct species. With this close proximity, Red Star found that her Crow heritage was being presented along with these extinct species, proposing the idea that her culture, too, was extinct; an idea suggested too often in the museum context. Red Star wanted to create something that comments on these natural history dioramas, but where her culture is presented as it is: living.

We first notice the fake components of the work, which almost come off as comedic, but then we notice that Red Star, posed and dressed in traditional clothing, is very much real. The outfit she is wearing is one similar to what her grandmother would dress her up in when she was young. The elk tooth dress, or iichí­ilihtawaleiittaashte, is important to Crow women because it is a status-symbol, showing that the men of a family are good hunters or traders, and because the Crow culture is matrilineal, these objects are passed down through the women. So while much of the portrait is artificial, the material heritage used and the person herself, are living and breathing, far from being extinct.

Wendy Red Star was raised on the Apsáalooke (Crow) reservation in Montana. Her work is informed by her cultural heritage and often challenges stereotypical representations of Native people and gives voice to those who have been historically silenced. Her work spans many different mediums including photography, sculpture, video, fiber arts, and performance art. Red Star has exhibited in the United States and abroad at venues including the Metropolitan Museum of Art, Fondation Cartier pour l’ Art Contemporain, Domaine de Kerguéhennec, Portland Art Museum, and the Minneapolis Institute of Art, among others. She was the 2016 Betty Bowen Award winner which resulted in a recent exhibition at Seattle Art Museum. Red Star obtained a BFA from Montana State University, Bozeman, and an MFA in sculpture from University of California, Los Angeles. She currently lives in Portland, Oregon.

For additional information and images, visit the artist’s website here.